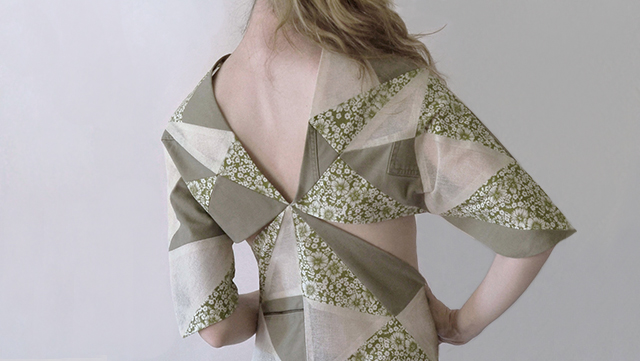 The art of Patchwork is all about finding the perfect mix of fabrics. The fun lies in recycling old clothes and using up odds and ends of fabric to create something unique. As in any art form, taste matters. Certainly, there are numerous styles of piecing blocks of fabrics together but, in the end, the process is not so different from making an abstract painting.

Taste perceptions aside, it seems very likely that the most beautiful form of patchwork comes from Korea. Tradition says that through this craft, makers bring luck, happiness and longevity for those receiving their artworks. Creativity made of good wishes. Its purpose has no rival, plus its beauty is mesmerizing.

The style is called Jogakbo. It has infinity of design variants but something in its playful composition makes it easily recognisable. Through a triple-stitched technique, its distinctive flat seams seal the off-cuts together. Originally, the pieces are sewn by improvisation until they form a square. These squares are known as bojagi and are used as domestic wrapping cloths. Some soften the light as windows panels while others wrap gifts between loved ones.

Inspired by the idea of a treasured wrap, these pieces explore a wearable version of the ancient technique. The patchwork composition combines pieces of non-dyed buckram with an old pair of khaki trousers and scraps of a flower printed tablecloth. As for the pattern, geometric figures are repeated to create bigger ones while the empty spaces and transparencies are intended to include the body as part of the palette.

No matter the style, patchwork proves it is possible to create value by transforming off-cuts into a new cloth. It is powerful to think that even when meant to be a wrap, if the piece is made with care, it is something to be kept.

Do NOT follow this link or you will be banned from the site!